Hi
I am the son of Ray Sanders and grandson of Clement Constant Sanders. I was born in Kingsford in 1940. I am not the Dick Sanders to whom you refer above and who apparently organised the Everson’s reunion in 1984 in Kempsey. This was told to me by Noel Everson at my aunt Jessie Boyes (nee Woodward) funeral at Kempsey on 30 Dec 2009. Noel had married Elsie Maud Sanders and told me that his grandmother was Elizabeth Grace Sanders. In the Kempsey Heritage Publications Catalogue, there are two documents: The Everson Families, by Phillip Everson, 1987 L and The Everson Story, by the Everson Reunion Committee, 1984 L. I have obtained extracts that relate to Sanders. Tracing them through I have found that Noel’s grandmother was the sister of my great grandfather Frederick.
All this though hinges on the fact that both Frederick and Elizabeth Grace were children of William Sanders (1823 – 1910) and Mary Ann Skivings (1830 – 1882).
Now my brother Bob (born Coledale 1937) has put together our family tree some years ago. In it he did not make a direct link between William and Mary Ann, and our great grandfather Frederick.
When I asked him if there was a direct link (email 31/1/10) he replied: “many years ago when i was in kempsey, i went to the registry office and made the same enquiry re frederick john. the lady at the desk asked me to wait a minute and disappeared out the back. she reappeared with the traditional dusty tome, and opened it at a page that showed the registration of his birth, the information provided by his father, william, who signed the declaration with an X in the four angles of which the clerk had written william- sanders- his- mark.it made the hairs stand up on the back of my neck. it was like seeing a ghost.”
Now this strongly suggests that William was illiterate and needed to sign with an X. In your text, though, it says that he “reads and writes”. What do you think is the explanation?
Note that my brother’s family tree gives William as born in Devon and his father as John. Mary Ann is given as ‘Mary Ann Skimmings’, whose parents were George Skimmings and Grace Daw.
I am happy to pass on anything that I have that may be useful. I have Bob’s family tree typed up in Word and Excel.
By the way, the Everson papers extracts show that your Aunty May Sanders Everson (b. 14 Jun 1911) married Ted Everson on 11 Jun 1930. To close the circle of family coincidence, Ted is the brother of the Noel Everson who approached me at the funeral.
Regards
Dick

PS Like the other Dick Sanders, I also take offence at the repeated inclusion of the letter U into my surname. I checked once in the Newcastle phone book and Saunders outnumbers Sanders by 5 to 1, so I guess that accounts for it. Still annoying though.

One thought on “DICK SANDERS” 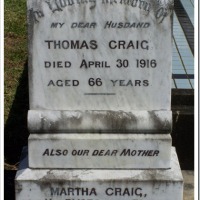 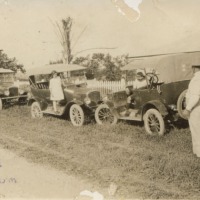 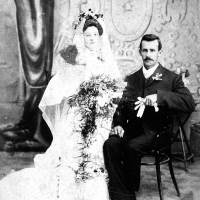