Ancestors Known to have arrived as EMIGRANTS are

The Sanders are marked on their disembarkation papers as “assisted emigrants”. The 19th century newspapers fill in a good deal of my lack of understanding of emigration in the 19th century. I have images of William Sanders and of Mary Ann Skivings Sanders but none of the other ” emigrants”. 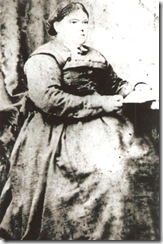 THE JACKSONS. from READY OR NOT – compiled by PHIL READY.

On 17th May 1853 a sixty ton ketch, WILLIAM BROWN, had arrived in Sydney from Honolulu. Aboard were immigrants WILLIAM JACKSON and his wife ELIZABETH and one daughter. William who had been born in Nottinghamshire in England was a Coppersmith by trade. On 26th November 1849 , in London he had married EIZABETH JOHNSON who had been born in Norfolk England.

In 1853 William whose trade was very much in demand set up in business in Steven Street, Ultimo. The following year his address appeared in SANDS directory as BAY STREET GLEBE. Julia from whom I descend  was born on 5th June 1860 – listed as Newtown.

THE OTHER 2 FAMILIES OF EMIGRANTS SO FAR TRACKED ARE :